The power of the water pushing from behind. The build-up of speed and setting the stance on the board. Now you are free to ride the wave as it roars, rises, and crests behind you, then reaches its peak. You race through the hollow to beat the wave as it crashes down after you. There is no one with you as you dare to defy the water and the waves. It is you, the board, and the one wave on this tremendous journey of strength, balance, and exhilarating energy.

This is the special experience artist Shaun Thomas wants to share with viewers, so they can get that same feeling, vicariously, that he has experienced throughout his life. His specialty is in depicting the curves of waves through his wave art sculptures in different interpretations.

Envision the experience of riding this wave as you gaze at it for a while. The energy coming from behind to build the wave is represented in the solid birch wood front overlay, stained to add unique definitions to the natural grain and ripples. The direction of the wood grain moves across from left to right, representing the force of the water pushing the wave to its crest and then curling over to plunge to the bottom. It is in this best part of experiencing a wave, that the magic holds its breath, forever immortalized in an infinite curved moment. Black curved shiny lines meet on the curve of the wave, giving a depth and perspective of distance that moves from the front of the picture, around to behind the wave as it breaks. The lines, from right to left, indicate the recession of the water from the beach line, heading back towards the wave as it breaks and rumbles towards the beach.

Sunset on the Horizon

Inside the tunnel, a shadow under the lip gives the wave a depth, as if to lead the viewer towards the waiting sunset at the other end. As evening comes in from behind, rays of the sun on the horizon shine brightly, highlighting parts of the water and far-off beach. Dark blues of the sky become lighter in stages as the sun stays in view at the edge of the world for just a little longer. You are led towards the last warm light of the day after surviving the force of the wave. The energy of waves gives way to calm and peacefulness with the light of the sun. 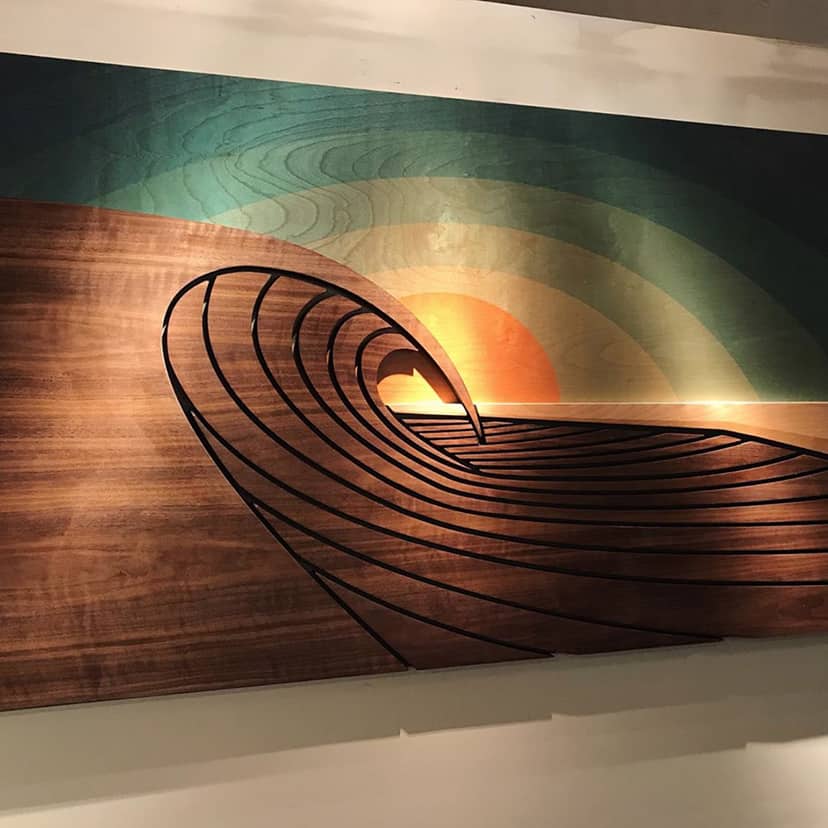 “Sunset Peak” is one of Shaun Thomas’ first wood wall sculpture created, his personal favorite and best seller. When you install this work of art in your home or office, placing an overhead lighting system can help bring out the natural highlights present in the wood. Changing lighting locations can give you alternate ways of how this surf art piece be viewed to create different experiences of contemplation. 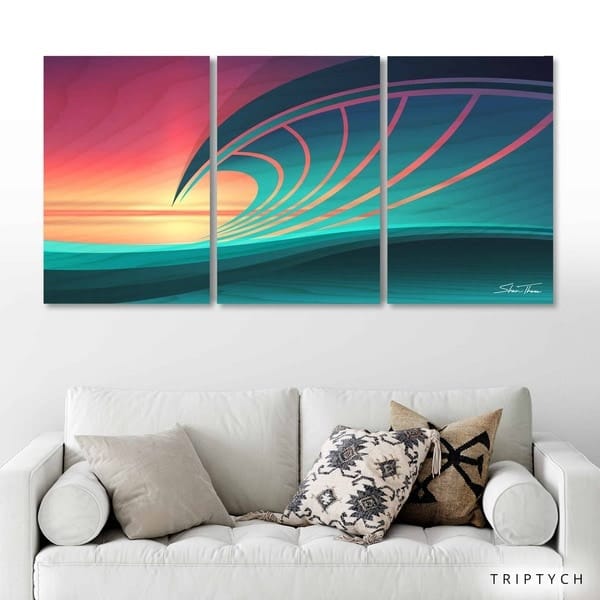 How are waves created?

Ocean waves are sourced by energy (solar and radiation) from our sun which enters our atmosphere and interacts with air. Heated air rises and expands, becoming thinner the higher warm air goes. Denser, cooler air blows across as our wind patterns that remain close to ground or sea surfaces. This cool air blows or pushes across the surface of the water, creating small ripples that become bigger, until full-scale waves replace ripples.

What makes a wave higher than others? Amazingly, waves do not travel across the ocean surface like a boat does but move in circular motions. How large a wave gets is dependent on three main factors: the wind speed, wind time, and wind distance. A fourth factor occasionally comes into play. That is the formation of the seabed in any given area of the ocean.

Wind Time: In combination with wind speed, the amount of time it takes for wind to blow across the surface (at any given speed), will produces varying heights of waves. In nautical terms, 20 knots (kts) equals 23 miles per hour (mph) in speed over surface distance.
This is the wind speed by time that will produce moderate-sized waves. The speed of wind is pushing energy in the water at for 23 miles over one hour.

Wind Distance: The previous example of Wind Time calculation also gave a distance within the speed of wind and amount of time for the wind to blow across a surface. But there are times when you can have gusts of winds which have high energy, pushing for over a minute, then dissipating, not even reaching the distance of 23 miles.

The fourth factor, seabed formation, is usually not an issue, especially when surfing closer to land. In most cases, the seabed is still smooth with very little formation disruption that would interfere with water energy progression. If there are rocky areas on the seabed, these can interfere with the energy output, notwithstanding that it is also dangerous to surfers when they go under.

Three Parts of a Wave

Crest: This is the highest point of a wave right before it breaks and falls over.
Trough: This is the bottom of a wave. As the wave begins to break over, the trough is also at its deepest point.
Face: The front of the wave between the crest and trough.

Watch a video here from 2020’s Big Wave Surfing Compilation. You can see why surfing waves is so much fun to do and to watch. Even a few local sharks are swimming around checking out the activities and adding to the excitement.

Now you know why professional surfers check the day’s wind characteristics before going out to surf in winds that produce those perfect waves every surfer hopes for. Wave artists like Shaun Thomas, love reproducing those perfect waves in various forms including large coastal sculptures, affordable beach prints on wood and canvas along with surfboard wall art.

If you are a local resident in Southern California and want to see Shaun’s wave art sculptures up close, call (949) 274-9023 for more information to visit his Laguna Beach Art Gallery.

ALL SCULPTURES & PRINTS SHIP FREE! (US ONLY)