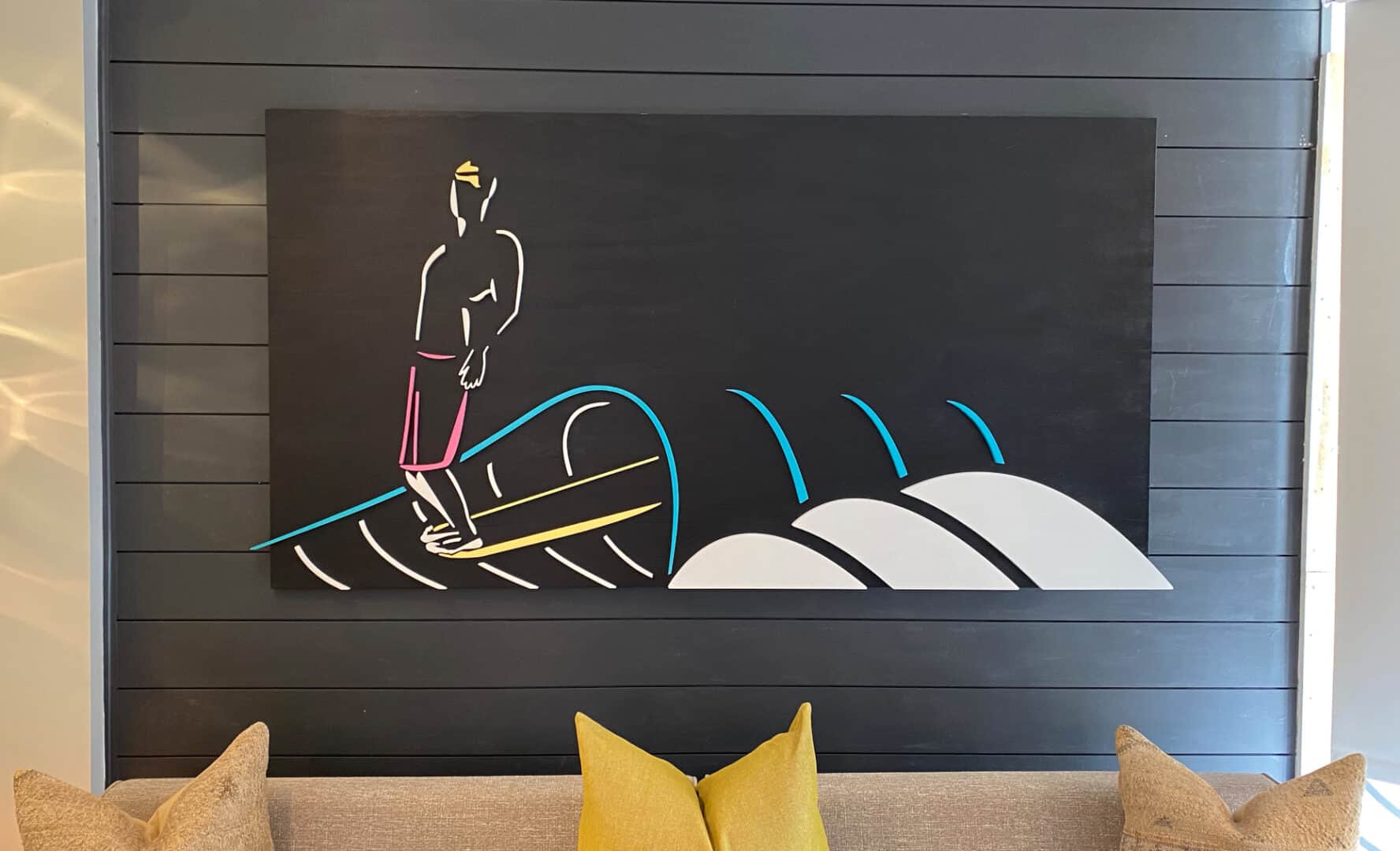 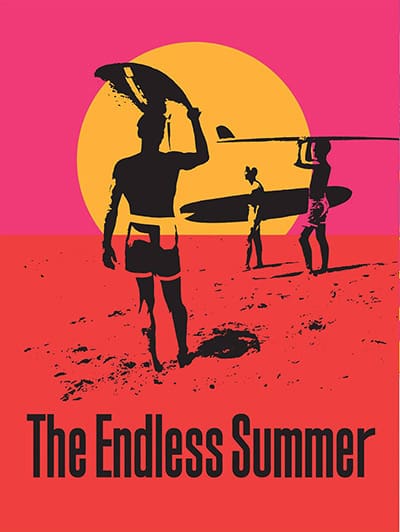 Endless Summer is a surf documentary that transformed surf culture and birthed retro surf art. Back in 1966, documentarian and competitive surfer, Bruce Brown decided to transform his passion for surfing into a film. His new career move followed professional surfers, Michael Hynson and Robert August on a surfing adventure around the globe. Their goal was to search for and find the wave of a lifetime – in Brown’s words “The Perfect Wave.”

Together, Mike, Rob, and Bruce, leave California with their longboards in hand and set their sights on faraway places. They travelled light with only their persons and 100 pounds of camera equipment. The trio went to areas like Senegal, Ghana, Nigeria, South Africa, Australia, New Zealand, Tahiti, and Hawaii. They did eventually find what they were looking for, “The Perfect Wave.” Located in Cape St. Francis, South Africa, this wave was a four-foot curl that looked machine made.

It’s mix of trending pop art marketing, laid-back filming, and thrilling adventure makes Endless Summer the ultimate surf cult classic. In 2002 the National Film Registry selected Endless Summer to be preserved thanks to its historical, cultural, and aesthetic significance to American culture. The film continues to give back to society long after it’s release. 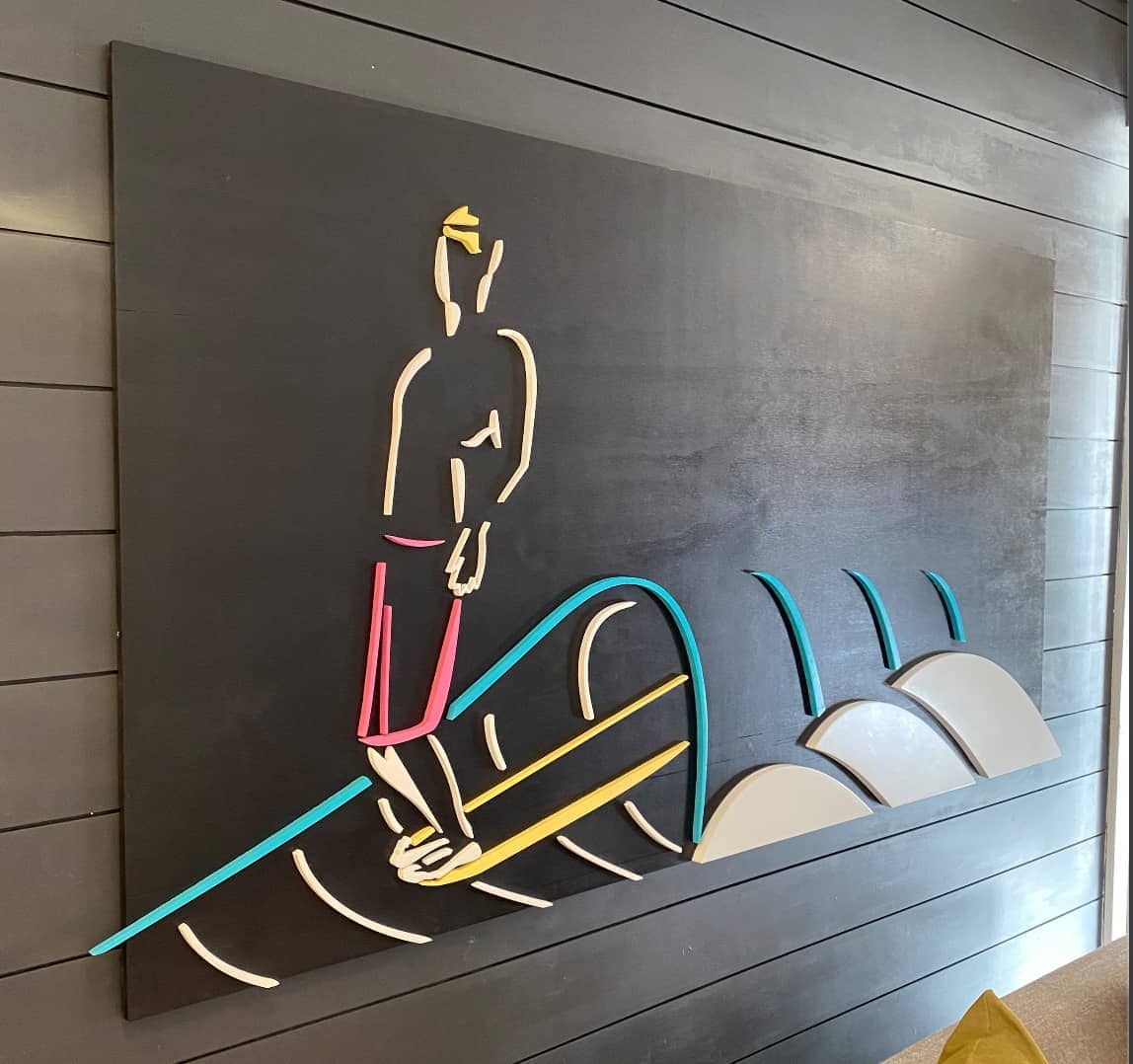 Though Endless Summer started the surf travel movement, it was Endless Summer II, that really resonated with Shaun and the retro surf artwork he creates today. The sequel that came 28 years after the original, ignited a new generation of surfers. Endless Summer II, released in 1994, brought back documentarian Bruce Brown and his surfing adventure to a younger audience. Endless Summer II follows the same adventures and as the new surfers both long-boarder and short-boarder set off around the globe, meeting with old and new friends along the way.

Growing up, Shaun’s love for the ocean and waves started young when his mom would take him and his friends to the beach at least 2-3 times a week during the summer months. Though he grew up bodyboarding, Shaun eventually started surfing around 13-14 years old. It’s at this time that he begins to watch Endless Summer II religiously. While the first Endless Summer movie focused on long-boarding, it was Endless Summer II that introduced Pat O’Connell, a local dana-point short-boarder who grew up 10 miles away from Shaun. It was Pat that inspired him to start surfing shorter boards. Shaun wanted to be just like Pat O’Connell.

As soon as Shaun received his license and had the freedom to drive himself to the beach, he became obsessed with surfing. His favorite surf spot Trestles, which was a 45-minute drive away from his house, didn’t stop him from surfing 3-4 times a week. Shaun recalls his gas guzzling truck being the main concern as he was a broke high-school kid. Working at a country club making good tips, he would use all of his cash to pay for his trips back and forth to the beach.

Eventually, Shaun took off on his own surfing adventures. He travelled the world, chasing the sun, summer, and waves a la Bruce Brown. He surfed in places like Australia, Nicaragua, Hawaii, Baja and Mainland Mexico. It is here that he was inspired to combine his love for surf and transform it into beautiful art pieces. He began carving waves in wood creating his line of wave sculptures and surf art. Endless Summer led him to discover a new passion and then turn it into a career.

Aside from providing surfing aficionados a perfect checklist to find the best waves, Endless Summer provided the art world with the 60×40 inch Day-Glo poster that inspired many surf art creatives. Created by John van Hamersveld for only $150 dollars, the poster features the silhouettes of Brown, Hynson, and August.

At the time, the bright hues of orange, pink, and yellow were highly criticized and often compared to colors a child would have chosen. Now, the movie poster is appreciated because of its high-contrast balanced composition two key elements of the pop art movement of the 60s. Van Hamersveld used the shadows of his subjects as negative space to tone down the pop of color and to draw attention to the film’s subject.

His new wave sculpture, “Endless Summer”, depicts a long-boarder hanging ten coasting through a wave. He references the poster by using bright colors like blue, pink, and orange accompanied by negative space, similar to Endless Summer’s poster. To ensure the colors popped he opted out of using dyes or stains and instead decided to use spray paint. This gives the sculpture a vibrant pop of color.

Shaun plays with the raised wood to give a 3D effect that gives a faux-realistic look to his art and quite literally makes it pop. The piece has waves overhanging from the side frame, giving it a multi-dimensional look. It’s almost as if you can see the waves movement and can follow along with your eyes – playing out the scene unfolding before you. The high contrast of its dark background and bright, colorful, and simple elements adds even more pop to this retro inspired piece.

Shaun continues to be inspired by the Endless Summer movies, his surf travel adventures, nature, and the ocean. As an artist dedicated to his line of wave art sculptures and surf inspired art, the vivid imagery, bold colors, and simplicity in Brown’s work spoke to him. With this particular wood wall sculpture, he combines vintage surf art with organic mediums and re-introduces it to the 21st century.

Want to get your hands on Shaun Thomas’ work? Click here!

ALL SCULPTURES & PRINTS SHIP FREE! (US ONLY)